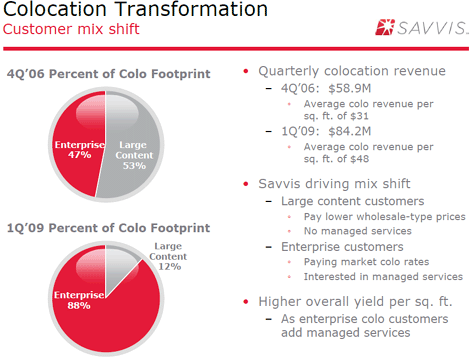 Shares of Savvis Inc. (SVVS) were sharply higher Wednesday after the managed hosting specialist raised its financial guidance for Wall Street on several key metrics, saying its free cash flow and EBITDA would be stronger than the company's previous estimates. The improved outlook was announced as Savvis posted solid earnings, adding a major new customer as several large accounts departed.

"We have been able to move our business away from customers paying below market rates through a concerted effort over the past 18 months," said Koen, noting that the company's revenue per square foot for colocation has improved from $31 in late 2006 to $48 in the first quarter.

Savvis also booked a $40 million deal with a "large online digital media services company" that will be outsourcing more than 10 petabytes of storage to Savvis. That customer win helped offset the loss of the American Stock Exchange, which is consolidating its data center services as part of its merger with NYSE/Euronext.

While enterprise customers are taking longer to make decisions during the economic downturn, Savvis is benefiting from interest in its virtualization solutions.

"Enterprise customers remain focused on cost saving and this is their main driver," said Koen. "As a result they are dramatically shifting their IT spend from growth projects to efficiency projects and we’ve seen a corresponding decline in project supporting growth efforts. Customers are interested in virtualization and consolidation as they look to drive savings."