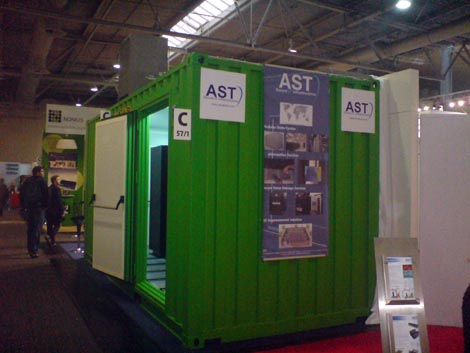 Sune Christesen of Data Center Map attended last week's huge CeBIT technology trade show in Hannover, Germany, and sent along some photos of a new data center container from AST Global. The Barcelona company is offering a dual container product, with one container housing IT equipment and a second container housing the supporting mechanical and electrical gear. AST has put together a YouTube video depicting their containers, and also has an unusual video in which it demonstrates the effectiveness of its SmartShelter enclosure by placing one inside a small structure and then burning it to the ground. Yes, the servers still work.

Thanks to Sune for his report! There are also videos available of many of the sessions at CeBIT, including presentations by Werner Vogels of Amazon and Reid Hoffman of LinkedIn.