CRG West's renovation of the former Western Union building in Chicago has positioned the site for growth in financial hosting, including a new derivatives trading exchange. 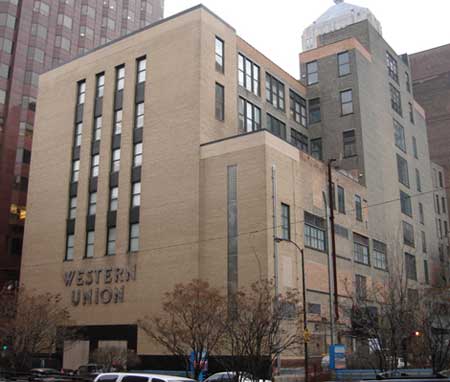 Nestled amid a hub of commodities exchanges in downtown Chicago, the former Western Union building at 427 South LaSalle Street bumps up against an alphabet soup of high stakes financial activity. The Chicago Stock Exchange and Chicago Board Options Exchange (CBOE) are immediately across LaSalle Street, while the Chicago Board of Trade (CBOT) and Chicago Mercantile Exchange (CME) frame the north side of the building.

When CRG West bought 427 South LaSalle last May, the building's focus was primarily  telecom. The company has invested $20 million in infrastructure upgrades to make the building more attractive to web hosting and financial companies, which are keen on its extraordinary proximity to the exchanges. One of its new customers could position the site as a key exchange for financial derivatives trading.

It's not the first time that an aging Chicago landmark has been transformed into a  data center hub. A decade ago CRG West's parent company, The Carlyle Group, worked with Core Location to redevelop 350 East Cermak into the city's largest data center facility. The former printing plant now has more than 70 tenants, including many key players in the Chicago commodity exchanges.

CRG West's makeover of 427 LaSalle has gotten off to a strong start. The building has numerous telecom tenants (15 carriers offer service), and CRG West is converting all unleased space into raised-floor data centers. The company has filled about 70 percent of its first phase, with tenants including Layered Technologies' FastServers unit and SkyCreek Corp., which provides automated customer support for enterprise customers.

CRG West recently announced a deal providing a beachhead in the lucrative financial hosting market. The International Derivatives Clearing Group (IDCG) has chosen 427 South LaSalle for a new electronic marketplace to make it easier to price and trade derivatives.

The difficulty in valuing derivatives - financial instruments whose value is based on other  assets - has been a huge issue in the current financial crisis, leaving huge financial firms and regulators without an easy way to judge losses in complex assets.

"Our goal here is to bring transparency to an opaque market," said Bob Greifeld, CEO of the NASDAQ OMX Group, a key backer of the new exchange. The emergence of IDCG aligns with the financial reform goals of the Obama administration. The New York Times reported Sunday that Obama's team is "preparing to require that derivatives be traded through a central clearinghouse and possibly on one or more exchanges."

CRG is hopeful the new tenant will become the focal point for an active financial ecosystem. "We've talked to folks at NASDAQ and IDCG, and they believe about half of their tenants will need to take space," said David Dunn, Senior Vice President of CR West. "We're also talking with three other exchanges who are in a position where they can't expand their business." 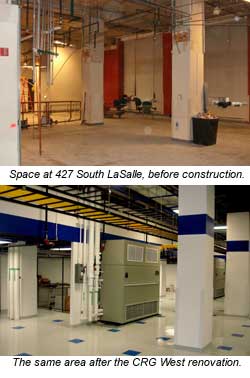 Attracting those tenants required a significant upgrade of the building's mission-critical infrastructure, including the installation of additional UPS units and generators - a process which required closing local streets on weekends to assemble the crane and host equipment to upper floors.

"We worked hard at refurbishing building that's been around for 90 years," said Dunn. "It's been a communications hub since 1919." CRG West has built out the infrastructure for one 20,000 foot pod and is nearing completion on another 20,000 feet of space, offering power densities of about 170 watts per square foot.

CRG West is already making long-term plans for additional improvements, which Dunn said might require some "creative engineering." For now, the company is focused on filling the building, and Dunn says demand has been promising. "The financials like the colo space right now," he said.