Google (GOOG) spent $368 million on its infrastructure in the fourth quarter of 2008 as it scaled back its ambitious data center building boom.

Google (GOOG) spent $368 million on its infrastructure in the fourth quarter of 2008 as it scaled back its ambitious data center building boom, idling a $600 million project. The fourth quarter capital expenditure (CapEx) total, which was included in today's earnings release, was less than half the  $842 million Google spent on its data centers in the first quarter of 2008.  Here's a look at the recent trend: 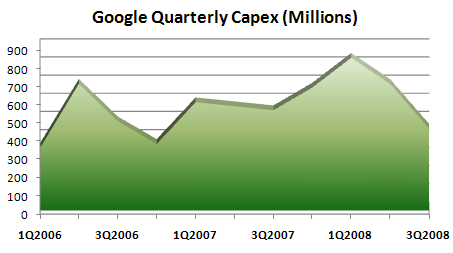 The lower spending reflects the company's decision to delay construction of its data center in Pryor, Oklahoma. Google halted construction at the site in late October, saying it had enough data center capacity to meet its current needs, but remains committed to the Pryor site and expects to complete the facilty in the next 12 to 18 months.

There were also reports that Google has slowed the pace of construction at its data center campus in Lenoir, North Carolina. The company has completed the first of two planned data centers in Lenoir, but last month told the state of North Carolina that it won’t meet the job creation criteria for a $4.7 million state grant. Google still has big plans for the site, however. In mid-December it paid $3.13 million to buy an additional 60 acres of land adjacent to the existing facility in Lenoir.

Google has completed the first phase of construction in Goose Creek, South Carolina, and is continuing work on a facility in Council Bluffs, Iowa.