Rackable Systems (RACK) today disclosed a new server architecture that can pack up to 264 low-power "MicroSlice" servers in a cabinet. 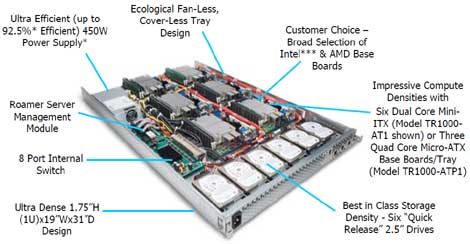 A diagram of a Rackable MicroSlice server tray.

Can racks filled with micro-servers provide the benefits of virtualization at a lower price point? Rackable Systems (RACK) today disclosed a new server architecture that can pack up to 264 low-power, low-cost "MicroSlice" servers in a cabinet.

Rackable says that creating a large number of physically independent compute nodes - an approach it calls "physicalization" - can be more cost effective than virtualization in scaling large cloud computing platforms. The company says many MicroSlice configurations will start at below $500.

The MicroSlice architecture places up to six AMD server boards and six 2.5 inch drives in a 1U Cloudrack tray with a single central power supply and 8 port internal switch. Each board is less than 7 inches wide, and uses as little as 72 watts of power.

"The new MicroSlice architecture is radical; we eliminated the need for virtualization software and set new density standards with 264 servers per cabinet," said Mark Barrenechea, president and CEO of Rackable Systems. "Our MicroSlice-enabled products are timely in this economic climate, allowing data center budgets to go twice as far."

Microsoft (MSFT) worked with Rackable on an early protype MicroSlice design in its Live platform, and found the design could be more cost effective than the servers currently powering major cloud computing server farms, according to a paper by former Microsoft researcher James Hamilton (now at Amazon). Those experiments measured cost effectiveness on the basis of work done per dollar and work done per joule.

CloudRack’s server trays have no cover and no fans, using larger fans in the rear door of the rack to cool the equipment. By going coverless, CloudRack cabinets can support 44 trays, two more than a standard seven-foot rack. That gives the TR1000-AT1, with six servers, a potential capacity of 264 servers.