Cisco Chief Technology Officer Padmasree Warrior is among the contenders for the newly-created CTO position in the Obama administration, according to Business Week. 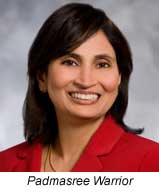 Business Week reports this morning that Cisco Chief Technology Officer Padmasree Warrior is among the contenders for the newly-created CTO position in the Obama administration, along with Washington DC CTO Vivek Kundra.

Warrior has confirmed (via Twitter) that she is attending Tuesday's inauguration, but declined specific comment on the administration job. Here's her e-mail statement for BusinessWeek: "Cisco is committed to working closely with the Obama Administration on their plans to deploy digital infrastructure to grow our economy and create jobs. Smart networking technologies and IT play a critical role in transforming government, energy, education, and health care. President-elect Obama and his team fully understand the importance of digital infrastructure to further our technology leadership as a nation."

President-elect Obama has outlined an ambitious agenda for national broadband access, and the initial economic stimulus proposal contains about $6 billion in grantsto bring high-speed Internet access to underserved areas. The bill includes references to conditions for "open access," according to DSLReports. Members of the Obama team say that is the first step in a larger investment in broadband infrastructure, with more details to come later in 2009.