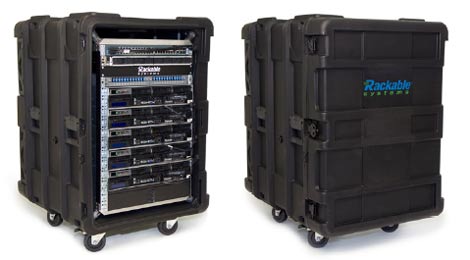 It's not just Internet users that are becoming more mobile. it's happening with Internet infrastructure as well. The mobility movement that began with data center containers is breeding new form factors to move servers and storage outside the data center.

Rackable Systems (RACK) today introduced MobiRack, an enclosure in a light-weight plastic case that contains servers, storage, networking, UPS and DC power distribution in one unit. MobiRack is more lightweight than a shipping container, but Rackable says it will protect equipment in "the most challenging environments."

MobiRack is a build-to-order product. Rackable says the enclosure meets shock and vibration standards, including those required by the military and the Air Transportation Authority.

Rackable offers MobiRack in more than 30 configuration options, featuring a choice of 1U or 2U servers powered by either Intel or AMD processors, and housed in 5U, 11U, 14U or 16U racks.  Air and water-tight containers are available, and a DC power option can support operation in environments with unreliable AC power.