Data Center Investor: As the Wall Street selloff grinds on, seven of the 13 data center companies we track now have market capitalizations of less than $200 million.

The last seven weeks have seen a fundamental revaluation of the US financial sector and many iconic corporations. GM shares trade for $2 and change, and Citigroup has dropped below $5. Shares of publicly-held data center companies have also declined sharply since Oct. 1, which we have been using as a demarcation point between the old order and the current environment.

This morning's Data Center Investor chart includes some jarring numbers in the columns for share price (Digital Realty at $21, Akamai at $9, NaviSite at 30 cents) and percentage loss since Oct. 1. On this chart we've also included market capitalization, which shows that seven of the 13 companies we track now have market caps below $200 million. 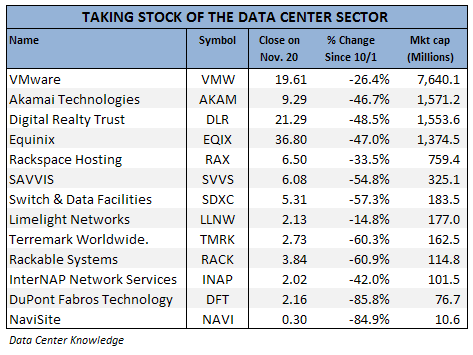 There are many factors that go into valuing a company, including debt load, cash on hand, and whether the company is profitable. But at this point, some of the market capitalizations appear to be disconnected from these companies' underlying business. NaviSite (NAVI), with a market cap below $11 million, has 15 data centers and 1,400 customers. DuPont Fabros (DFT) just raised $100 million and suspended its construction projects, yet has a market cap of $76 million.

The numbers are sobering. Of course, we could soon see another of those rallies that carries the Dow 900 points higher. Crazy volatility is the new norm, and as we've learned, a lot can change in just a few weeks.