A relatively new approach to data center cooling known as a "heat wheel" is gaining momentum, and likely to gain a higher profile from an upcoming demonstration of the technology. 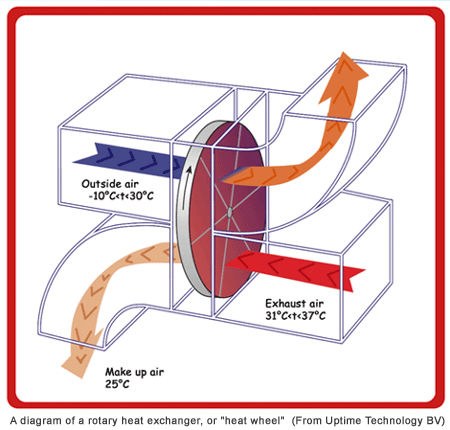 A relatively new approach to data center cooling known as a "heat wheel" is gaining momentum, and likely to gain a higher profile from an upcoming demonstration of the technology. The heat wheel - also known as a rotary heat exchanger or Kyoto Cooling - is a refinement of existing approaches that take advantage of outside air to improve cooling efficiency and reduce data center power bills.

Proponents of the heat wheel say it improves upon air-side economization (free cooling), the use of outside air to cool servers in the data center. Rather than introducing exterior air directly into the server room, the heat wheel briefly mixes the outside air and exhaust air to creates an "air-to-air" heat exchanger.

"The inside heat from the IT room is still removed via the heat wheel, but there is minimal air transfer between the ambient and the computer room," explains Uptime Technology BV of the Netherlands. "This system has all the benefits of Airside Economizing, without the exposures of airside economizing like contamination and humidity control."

Heat wheels have been used for many years in industrial air conditioning, but never in data centers. Like air-side economization, heat wheels could produce significant energy savings by reducting the need to use power-hungry chillers for air conditioning. 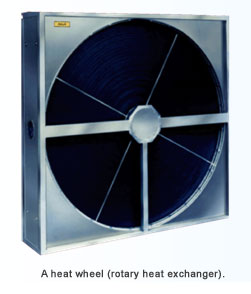 Uptime Technology has filed a patent application with the European Patent Office on the technology. In 2007 it partnered with Chatsworth Products Inc., joining the heat wheel with Chatsworth's hot-air containment to produce Kyoto Cooling. The technology has been implemented by European telecom firm KPN in one of its CyberCenter data centers in Amersfoort, The Netherlands. KPN uses the system at outside temperatures of up to 72 degrees (22 C), and it effectively cools exhaust air of up to 98 degrees.

The Amersfoort CyberCenter will be the site of a series of seminars December 1-4 in which Kyoto Cooling will be demonstrated. Representatives of UpTime Technology, Chatsworth and KPN will present, along with Bob Sullivan of the Uptime Institute in the US.

Sullivan is known for originating the hot aisle-cold aisle configuration used in most modern data centers.  The Uptime Institute has examined the potential of the the heat wheel in its discussions of data center energy efficiency at several of its events, most notably its design charette in 2007.

While Kyoto Cooling has its proponents, its use is limited to climates with temperature profiles that would allow the heat wheel to be used for a substantial part of the year. The geographic range for heat wheel usage is likely to closely resemble regions favorable for air-side economization.