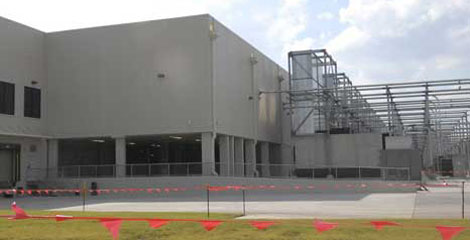 The above photo of Google's brand-new data center in Goose Creek, South Carolina may provide a clue. The picture, snapped by Charleston-area news blog The Digitel clearly shows a section of the data center that is lighted and open to the elements, looking quite a bit like a parking deck. You can see larger copy of the image at Flickr.

Could this be Google's version of the two-story approach used by Microsoft in Chicago, with a first story packed with containers and an upper floor using conventional racks? Or might the "parking deck" serve another purpose?

The exterior views available during the Oct. 7 groundbreaking event at the Goose Creek data center don't provide many answers, but raise some interesting questions. Attendees were not allowed inside the data center during the event, which was held in a tent in front of the facility. But a number of news organizations have published pictures.

The ceiling in the open area looks to be high enough to accommodate a container (a 40-foot container is typically 8.5 to 9.5 feet high), but perhaps not aboard a delivery vehicle. It's clearly a smaller space than the Microsoft container area in Northlake.

I've learned to be cautious about drawing any conclusions from photos like this. But pictures of other Google data centers indicate that the Goose Creek design is new, and was first seen in the Lenoir facility (seen below), which also has an open area at one end.

The data center designs at Lenoir and Goose Creek are clearly a departure from facilities built in 2006 in The Dalles, Oregon, as seen in photos taken by The New York Times and John Nelson. It's also substantially different from the design of a Google data center in Eemshaven in the Netherlands that was photographed in 2007 by Erwin Boogert:

For a full pictorial history of the inside of Google's data centers, see James Hamilton's blog (scroll down when you get there for the photos), where James has posted some photos supplied by Google's Jeff Dean.

For more photos from the Goose Creek data center, you can check out The Digitel's  Flickr set,  the Charleston City Paper and LowCountry Bloggers. Here's some of our previous coverage of Google's South Carolina projects: