While much of the data center sector was seeing sharp declines in stock prices, shares of Terremark (TMRK) surged 25.8 percent in the third quarter of 2008. A roundup of the 3Q winners and losers.

The team at Terremark Worldwide knows about difficult market conditions. The Miami company built big during the dot-com boom and then fought to survive during the brutal downturn of 2003. Terremark's durability has served it well in recent months, when it has emerged as a strong performer during the market meltdown of 2008.

While much of the data center sector was seeing sharp declines in stock prices, shares of Terremark (TMRK)  surged 25.8 percent in the third quarter of 2008. Digital Realty Trust (DLR) and Savvis Inc. (SVVS) were the only other companies in the sector to finish the quarter in the black. Here's a look at the best and worst performers for the three months ended Sept. 30: 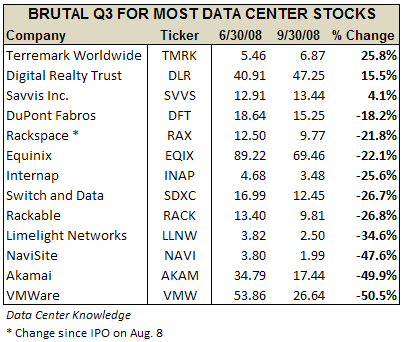 Rackspace (RAX) was the only IPO during the quarter for a data center or hosting company, going public at $12.50 before seeing its slide 2 percent to close the quarter down 22 percent. While a disappointment, that turned out to be a better performance than many other public companies in the sector. Former high fliers Akamai (AKAM) and VMware (VMW) each shed half their value during the quarter.

For the year to date, the best performer in the sector was Digital Realty Trust with a gain of 20 percent. Terremark is the only other company whose share price has gained in 2008, while VMware, Limelight Networks (LLNW) and Navisite (NAVI) have all lost 60 percent or more on the year. 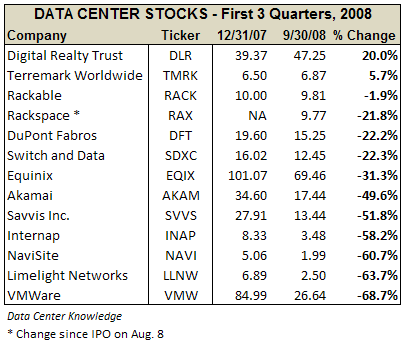 The quarter ended with some unusual activity that may have gone beyond the usual "window dressing" by fund managers on the final day of a quarter, according to the New York Times:

Tuesday’s closing prices were particularly important to money managers who report their performance based on quarterly figures, and suspicions of “painting the tape” — buying shares at the end of the day to drive up the price — have been common during the final minutes of a quarter. This year, with traders no longer allowed to short financial stocks, sharp rises in share prices in the final minute could not be offset by short-sale orders from investors who suspected tape-painting.

The strangest trading of all was seen in the shares of Google (GOOG), which fluctuated wildly in the final five minutes of trading, prompting a NASDAQ inquiry into "possibly erroneous" trades.