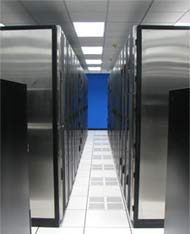 The markets may be in turmoil, but private equity firms continue to invest in the data center sector. Seaport Capital, which has invested in several Internet infrastructure companies, has acquired American Internet Services (AIS), a San Diego-based colocation provider that operates three data centers in California. Seaport has previously been a major investor in Switch and Data (SDXC) and Peak 10.

"I am thrilled to take the reins of this successful company at a point where there is so much potential for growth and success," said Carrasco. "I will work with the rest of the management team to ensure that AIS will continue to be the major player in the colocation business. Our new Lightwave Data Center in San Diego is a perfect example of our expansion plans for state-of-the-art data centers throughout the Western United States. We have over 105,000 square feet of Tier 4 data center space in San Diego, making us strategically positioned for continued aggressive growth and success."

AIS says the new Lightwave Data Center is the largest colocation facility in San Diego with more than 80,000 square feet. The center was designed with N+1 or better redundancy in all data center systems, including bandwidth, power, HVAC, fire suppression and security.

Carrasco has more than 17 years of management experience in the telecommunications and technology industries. She joined AIS in 2004, and has been responsible for running the company's day-to-day operations for the last 18 months. Prior to joining AIS, Carrasco was a sales director for a colocation subsidiary of Allegiance Telecom.

DeuPree was one of the founders of AIS. "AIS is currently the leader in state-of-the-art data center facilities in San Diego, and now with Seaport's involvement, the company will be able to expand into new regions with the technology and systems we have developed," said DeuPree.

Seaport Capital acquired AIS for its leadership position in the San Diego market, profitability and growth potential, the company said. Under Seaport's ownership, AIS will continue operations as usual, with all other revious employees. The company plans to expand its business model to include development in locations throughout the Western region of the United States.