Can A Floating Data Center Weather A Hurricane?

Could a floating data center like the one described in Google's patent filing weather a hurricane? 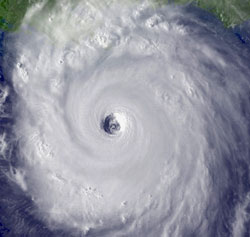 Google's design for floating data centers, described in a patent application, addresses many of the cost issues that make operating a data center so expensive. In Google's concept, the ocean would provide most of the energy to power and cool the servers and equipment, while also eliminating expenses for real estate and property taxes. As Larry Dignan points out, the design addresses many of the budget-busting features of the modern data center. "I’d call it brilliant engineering, but the financial engineering could be even more impressive," Larry writes.

It certainly makes for interesting reading. But can Google's new design address the operational challenges of a floating oceanic data center? One of the biggest question marks is the facility's ability to survive disasters.

Would a Google data barge be able to weather a hurricane? Or a tsunami? In the past two weeks hurricanes have struck both the Gulf and Atantic coasts of the U.S., and Hurricane Ike is on track to threaten the western Gulf later this week. At first glance, the Google data barges seem even more exposed than the data center cargo ships proposed by IDC, which would be docked in harbors.

The floating data centers described by Google would be located 3 to 7 miles from shore, in 50 to 70 meters of water, and feature a grid-like collection of up to 40 or more Pelamis Wave Energy Converters. The Pelamis units, a semi-submerged chain of cylinders linked by hinged joints, are each about 140 meters in length. Each data center would also feature a ship or floating platform stacked with data center containers.

It sounds less sturdy than oil platforms, and it's not clear how mobile they would be when presented with a short-term hazard like the 125 mile per hour winds if Hurricane Gustav. Google's patent filing briefly addresses the issue of disaster readiness. Here's the key excerpt:

The filing also cites the mobile nature of the floating data center (and particularly the data center containers) as an advantage over traditional data centers. Google notes that "the mooring fields may be moved, such as when demand for computing or telecommunications power moves, when sea conditions change (e.g., seasonally) or when a time period for legal occupation of an area expires."

Google historically has had little to say about its data center operations and any technologies it is seeking to patent. It remains to be seen if and when we will hear more about whether this is a concept patent or Google is actually test-driving a floating data center.